How to perform automated incident response in a multi-account environment

How quickly you respond to security incidents is key to minimizing their impacts. Automating incident response helps you scale your capabilities, rapidly reduce the scope of compromised resources, and reduce repetitive work by security teams. But when you use automation, you also must manage exceptions to standard response procedures.

In this post, I provide a pattern and ready-made templates for a scalable multi-account setup of an automated incident response process with minimal code base, using native AWS tools. I also explain how to set up exception handling for approved deviations based on resource tags.

Important: Use caution when introducing automation. Carefully test each of the automated responses in a non-production environment, as you should not use untested automated incident response for business-critical applications.

In the solution described below, you use AWS Systems Manager automation to execute most of the incident response steps. In general, you can either write your own or use pre-written runbooks. AWS maintains ready-made operational runbooks (automation documents) so you don’t need to maintain your own code base for them. The AWS runbooks cover many predefined use cases, such as enabling Amazon Simple Storage Service (S3) bucket encryption, opening a Jira ticket, or terminating an Amazon Elastic Compute Cloud (EC2) instance. Every execution for these is well documented and repeatable in AWS Systems Manager. For a few cases where there are no ready-made automation documents, I provide three additional AWS Lambda functions with the required response actions in the templates. The Lambda functions require minimal code, with no external dependencies outside AWS native tools.

You use a central security account to execute the incident response actions in the automation runbooks. You don’t need to do anything in the service accounts where you monitor and respond to incidents. In this post, you learn about and receive patterns for:

Out-of-scope for this solution

This post only shows you how to get started with security response automation for accounts that are part of the same AWS organization and Region. For more information on developing a comprehensive program for incident response, see How to prepare for & respond to security incidents in your AWS environment.

Understanding the difference between this solution and AWS Config remediation

There are many technical patterns and solutions for responding to security incidents. When considering the right one for your organization, you must consider how much flexibility for response actions you need, what resources are in scope, and the skill level of your security engineers. Also consider dependencies on external code and applications, software licensing costs, and your organization’s experience level with AWS.

If you want the maximum flexibility and extensibility beyond AWS Systems Manager used in this post, I recommend AWS Step Functions as described in the session How to prepare for & respond to security incidents in your AWS environment and in DIY guide to runbooks, incident reports, and incident response. You can create workflows for your runbooks and have full control of all possible actions. 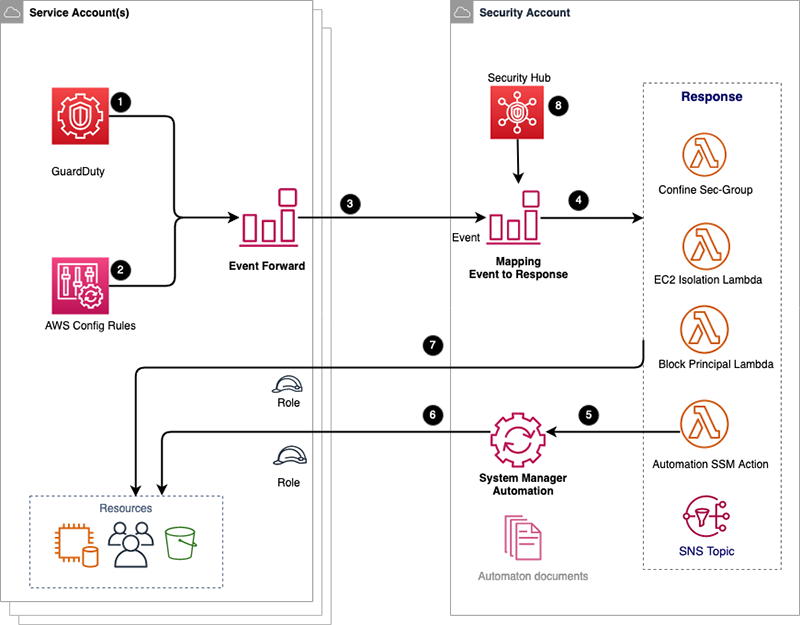 The architecture works as follows:

In the service account (the environment for which we want to monitor and respond to incidents):

Your organization wants to articulate information security policy decisions and then create a list of corresponding automated security responses. Factors to consider include the classification of the resources and the technical complexity of the automation required. Start with common, less complex cases to get immediate gains, and increase complexity as you gain experience. Many stakeholders in your organization, such as business, IT operations, information security, and risk and compliance, should be involved in deciding which incident response actions should be automated. You need executive support for the political will to execute policies.

There may be cases in which it’s unwise to take an automated response. For example, you might not want an automated response to incidents involving a core production database server that is critical to business operations. Instead, you’d want to use human judgment calls before responding. Or perhaps you know there are alarms that you don’t need for certain resources, like alerting for an open security group when you intentionally use it as a public web server. To address these exceptions, there is a carve-out. If the AWS resource has a tag with the name SecurityException, a response action isn’t executed. The tag name is defined during installation.

Table 1 provides an example of the responses implemented in this solution template. You might decide on different actions and different priorities for your organization. A current list of GuardDuty findings can be found at Active Finding Types and for AWS Config at AWS Config Managed Rules.

After you have deployed both stacks, you can test your environment by following these example steps in one of your service accounts. Before you test, you can subscribe to the SNS topic with prefix Security_Alerts_[Your_Stack] to be notified of a security event.

If the resource has the tag name SecurityException, a response action is not executed. The tag name is a parameter of the CloudFormation stack in the security account and can be customized at installation. The value of the tag is not validated, but it is good practice for the value to refer to an approval document such as a Jira issue. In this way, you can build an auditing chain of the approval. For example:

Make sure that the security tag can only be set or modified by an appropriate role. You can do this in two ways. The first way is to attach a deny statement to all policies that do not have privileges to assign this tag. An example policy statement to deny setting, removing, and editing of this tag for IAM, EC2, and S3 services is shown below. This policy does not prohibit working with the resources, such as starting or stopping an EC2 instance with this tag. See Controlling access based on tag keys for more information.

In the above policy, you must modify the TAG-NAME-SecurityException to match your own tag name.

The second way to restrict the attachment of this tag is to use Tag policies to manage tags across multiple AWS accounts.

Attaching security tags is a decentralized approach in which you don’t need a centralized database to record remediation exceptions. A centralized exception database requires that you know each individual resource ID to set exceptions, and this is not always possible. Amazon EC2 Auto Scaling is a good example where you might not know the EC2 instance ID in advance. On an up-scaling event, the instance ID can’t be known in advance and preapproved. Furthermore, a central database must be kept in sync with the lifecycle of the resources, like with an instance down-scaling event. Hence, using tags on resources is a decentralized approach. If needed, the automatic scaling launch configuration can propagate the security exception tag; see Tag your auto scaled EC2 instances.

You can manage the IAM policies and roles for tagging either centrally or within an AWS CodePipeline. In this way, you can implement a centralized enforcement point for security exceptions but decentralize storing of the resource tags to the resources themselves.

You can subscribe to the SNS topic with prefix Security_Alerts_[Your_Stack] to be notified of a security event or an execution that has failed.

Every execution is triggered from CloudWatch Events, and each of these events generates CloudWatch metrics. Under CloudWatch rules, you can see the rules for event forwarding from service accounts, or for triggering the responses in the central security account. For each CloudWatch rule, you can view the metrics by checking the box next to the rule, as shown in Figure 3, and then select Show metrics for the rule.

Here’s an example: Your team decides that a new SSM action – Terminate EC2 instance – should be triggered on the GuardDuty finding Backdoor:EC2/C&CActivity.B!DNS. In the security account, go to CloudWatch in the AWS Management Console. Create a new rule as described in the following steps (and shown in Figure 4): 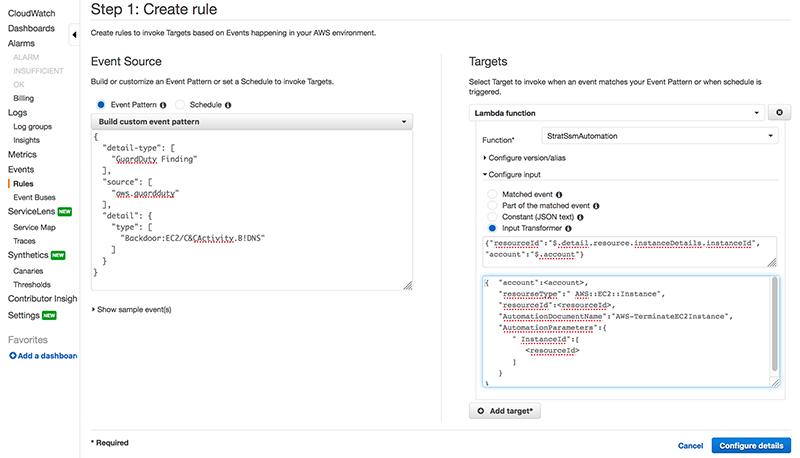 You have now created a new response action that is ready to test.

AWS Security Hub aggregates alarms from GuardDuty and other providers. To get Security Hub to aggregate alarms, you must first activate Security Hub before deploying this solution. Then, invite your environment accounts to the security account as master. For more information, see Master and member accounts in AWS Security Hub.

The integration with Security Hub is for manual triggering and is not part of the automated response itself. This can be useful if you have findings that require security investigation before triggering the action.

From the Security Hub console, select the finding and use the Actions drop down menu in the upper right corner to trigger a response, as shown in Figure 5. A CloudWatch event invokes the automated response, such as a Lambda function to isolate an EC2 instance. The Lambda function fetches the GuardDuty finding from the service account and executes one of the following: Isolate EC2 Instance, Block Principal, or Send SNS Notification.

Only one resource can be selected for execution. If you select multiple resources, the response is not executed, and the Lambda log message is shown in CloudWatch Logs.

Cost of the solution

The cost of the solution depends on the events generated in your AWS account and chosen AWS Region. Costs might be as little as several U.S. dollars per month and per account. You can model your costs by understanding GuardDuty pricing, automation pricing in AWS system manager, and AWS Config pricing for six AWS Config rules. The costs for AWS Lambda and Amazon CloudWatch are expected to be minimal and might be included in your free tier. You can optionally use Security Hub; see AWS Security Hub pricing.

In this post, you learned how to deploy an automated incident response framework using AWS native features. You can easily extend this framework to meet your future needs. If you would like to extend it further, contact AWS professional services or an AWS partner. If you have technical questions, please use the Amazon GuardDuty or AWS Config forums. Remember, this solution is only an introduction to automated security response and is not a comprehensive solution.