A data lake is a centralized repository for storing structured and unstructured data at any scale. At Intuit, creating such a pile of raw data is easy. However, more interesting challenges present themselves:

This post outlines the approach taken by Intuit, though it is important to remember that there are many ways to build a data lake (for example, AWS Lake Formation).

We’ll cover the technologies and processes involved in creating the Intuit Data Lake at a high level, including the overall structure and the automation used in provisioning accounts and resources. Watch this space in the future for more detailed blog posts on specific aspects of the system, from the other teams and engineers who worked together to build the Intuit Data Lake.

In this pattern, access to Central Data Lake is apportioned to spoke accounts called Processing Accounts. This model maintains separation between end users and allows for division of billing among distinct business units. 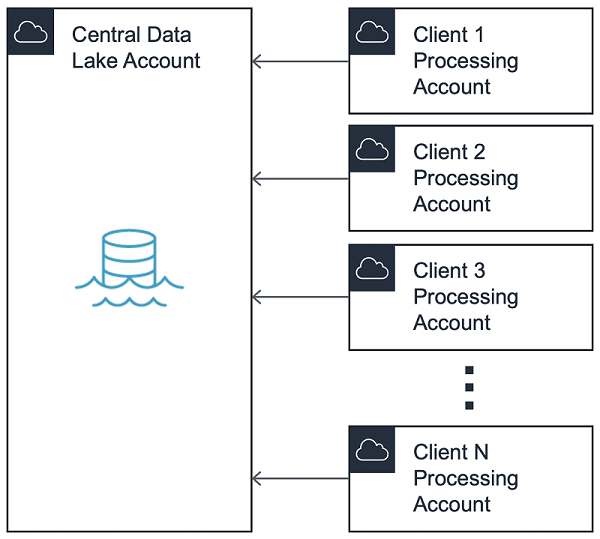 It is common to maintain two ecosystems: pre-production (Pre-Prod) and production (Prod). This allows data lake administrators to silo access to data by preventing connectivity between Pre-Prod and Prod.

To enable experimentation and testing, it may also be advisable to maintain separate VPC-based environments within Pre-Prod accounts, such as dev, qa, and e2e. Processing Account VPCs would then be connected to the corresponding VPC in Central Data Lake.

Note that at first, we connected accounts via VPC Peering. However, as we scaled we quickly approached the hard limit of 125 VPC peering connections, requiring us to migrate to AWS Transit Gateway. As of this writing, we connect multiple new Processing Accounts weekly. 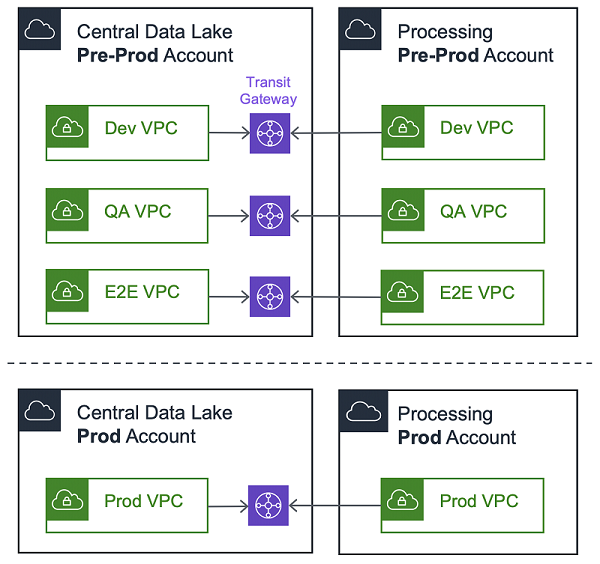 There may be numerous services running in a hub account, but we’ll focus on the aspects that are most relevant to this blog: ingestion, sanitization, storage, and a data catalog. 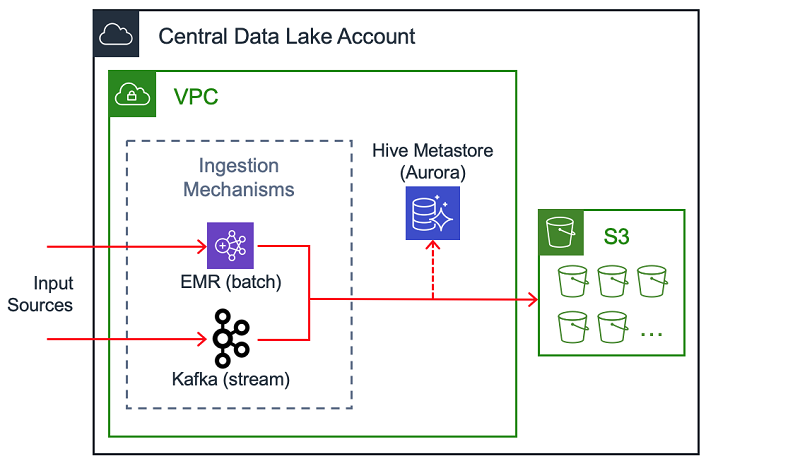 A key component to Central Data Lake is a uniform ingestion pattern for streaming data. One example is an Apache Kafka cluster running on Amazon EC2. (You can read about how Intuit engineers do this in another AWS blog.) As we deal with hundreds of data sources, we’ve enabled access to ingestion mechanisms via AWS PrivateLink.

Note: Amazon Managed Streaming for Apache Kafka (Amazon MSK) is an alternative for running Apache Kafka on Amazon EC2, but was not available at the start of Intuit’s migration.

In addition to stream processing, another method of ingestion is batch processing, such as jobs running on Amazon EMR. After data is ingested by one of these methods, it can be stored in Amazon S3 for further processing and analysis.

Intuit deals with a large volume of customer data, and each field is carefully considered and classified with a sensitivity level. All sensitive data that enters the lake is encrypted at the source. The ingestion systems retrieve the encrypted data and move it into the lake. Before it is written to S3, the data is sanitized by a proprietary RESTful service. Analysts and engineers operating within the data lake consume this masked data.

A data catalog is a common way to give end users information about the data and where it lives. One example is a Hive Metastore backed by Amazon Aurora. Another alternative is the AWS Glue Data Catalog. 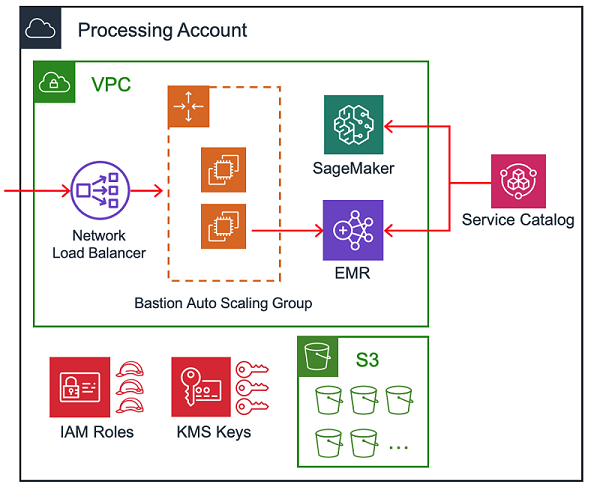 One reasonable question is whether all data should reside in Central Data Lake, or if it’s acceptable to distribute data across multiple accounts. A data lake might employ a combination of the two approaches, and classify data locations as primary or secondary.

The primary location for data is Central Data Lake, and it arrives there via the ingestion pipelines discussed previously. Processing Accounts can read from the primary source, either directly from the ingestion pipelines or from S3. Processing Accounts can contribute their transformed data back into Central Data Lake (primary), or store it in their own accounts (secondary). The proper storage location depends on the type of data, and who needs to consume it.

One rule worth enforcing is that no cross-account writes should be permitted. In other words, the IAM principal (in most cases, an IAM role assumed by EC2 via an instance profile) must be in the same account as the destination S3 bucket. This is because cross-account delegation is not supported—specifically, S3 bucket policies in Central Data Lake cannot grant Processing Account A access to objects written by a role in Processing Account B.

Another possibility is for EMR to assume different IAM roles via a custom credentials provider (see this AWS blog), but we chose not to go down this path at Intuit because it would have required many EMR jobs to be rewritten. 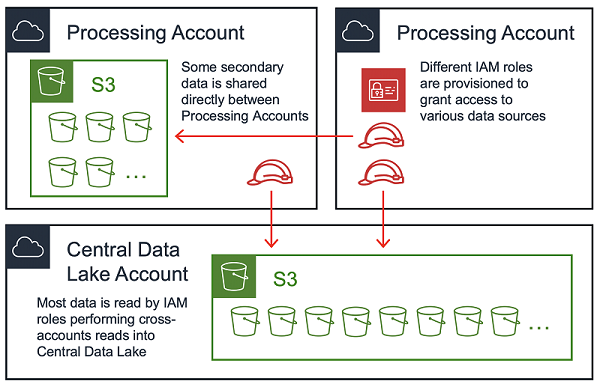 The majority of end users are interested in the data that resides in S3. In Central Data Lake and some Processing Accounts, there may be a set of read-only S3 buckets: any account in the data lake ecosystem can read data from this type of bucket.

To facilitate management of S3 access for read-only buckets, we built a mechanism to control S3 bucket policies, administered entirely via code. Our deployment pipelines use account metadata to dynamically generate the correct S3 bucket policy based on the type of account (Pre-Prod or Prod). These policies are committed back into our code repository for auditability and ease of management.

We employ the same method for managing KMS key policies, as we use KMS with customer managed customer master keys (CMKs) for at-rest encryption in S3.

Here’s an example of a generated S3 bucket policy for a read-only bucket:

Note that we grant access at the account level, rather than using explicit IAM principal ARNs. Because the reads are cross-account, permissions are also required on the IAM principals in Processing Accounts. Maintaining these policies—with automation, at that level of granularity—is untenable at scale. Furthermore, using specific IAM principal ARNs would create an external dependency on foreign accounts. For example, if a Processing Account deletes an IAM role that is referenced in an S3 bucket policy in Central Data Lake, the bucket policy can no longer be saved, causing interruptions to deployment pipelines.

Security is mission critical for any data lake. We’ll mention a subset of the controls we use, but not dive deep.

Encryption can be enforced both in transit and at rest, using multiple methods:

There’s nothing out of the ordinary in our approach to ingress and egress, but it’s worth mentioning the standard patterns we’ve found important:

Policies restricting ingress and egress are the primary points at which a data lake can guarantee quality (ingress) and prevent loss (egress).

Access to the Intuit Data Lake is controlled via IAM roles, meaning no IAM users (with long-term credentials) are created. End users are granted access via an internal service that manages role-based, federated access to AWS accounts. Regular reviews are conducted to remove nonessential users.

We use an internal fork of Cloud Custodian, which is a suite of preventative, detective, and responsive controls consisting of Amazon CloudWatch Events and AWS Config rules. Some of the violations it reports and (optionally) mitigates include:

Lastly, Amazon GuardDuty is enabled in all Intuit Data Lake accounts and is monitored by Intuit Security.

If there is one thing we’ve learned building the Intuit Data Lake, it is to automate everything.

There are four areas of automation we’ll discuss in this blog:

The first step in creating a Processing Account is to make a request through an internal tool. This triggers automation that provisions an Intuit-stamped AWS account under the correct business unit.

Note: AWS Control Tower’s Account Factory was not available at the start of our journey, but it can be leveraged to provision new AWS accounts in a secured, best practice, self-service way. 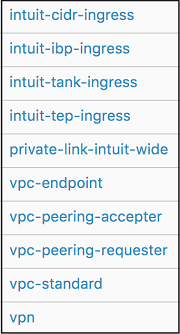 There is one pipeline for every Processing Account, and each pipeline deploys a series of layers into the account, using a set of parameterized deployment jobs. A layer is a logical grouping of Terraform modules and AWS resources, providing a way to shrink Terraform state files and reduce blast radius if redeployment of specific resources is required.

AWS Service Catalog facilitates the provisioning of Amazon EMR and Amazon SageMaker, allowing end users to launch EMR clusters and SageMaker notebook instances that work out of the box, with embedded security.

Service Catalog allows data scientists and data engineers to launch EMR clusters in a self-service fashion with user-friendly parameters, and provides them with the following: 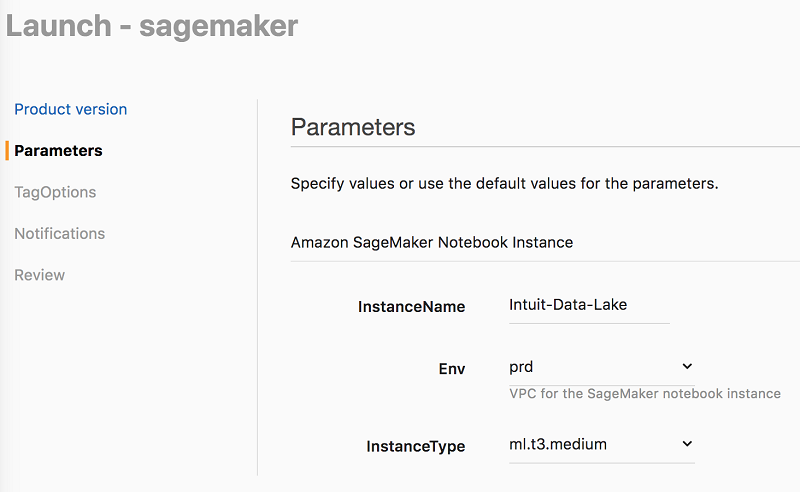 This post illustrates the building blocks we used in creating the Intuit Data Lake. Our solution isn’t wholly unique, but comprised of common-sense approaches we’ve gleaned from dozens of engineers across Intuit, representing decades of experience. These practices have enabled us to push petabytes of data into the lake, and serve hundreds of Processing Accounts with varying needs. We are still building, but we hope our story helps you in your data lake journey.

Michael Sambol is a senior consultant at AWS. He holds an MS in computer science from Georgia Tech. Michael enjoys working out, playing tennis, traveling, and watching Western movies.

Ben Covi is a staff software engineer at Intuit. At any given moment, he’s probably losing a game of Catan.