Like other developers around the world, you may be tackling increasingly complex business problems. A key success factor, in that case, is the ability to break down a large project scope into smaller, more manageable components. A service-oriented architecture guides you toward designing systems as a collection of loosely coupled, independently scaled, and highly reusable services. Microservices take this even further. To improve performance and scalability, they promote fine-grained interfaces and lightweight protocols.

However, the communication among isolated microservices can be challenging. Services are often deployed onto independent servers and don’t share any compute or storage resources. Also, you should avoid hard dependencies among microservices, to preserve maintainability and reusability.

If you apply the pub/sub design pattern, you can effortlessly decouple and independently scale out your microservices and serverless architectures. A pub/sub messaging service, such as Amazon SNS, promotes event-driven computing that statically decouples event publishers from subscribers, while dynamically allowing for the exchange of messages between them. An event-driven architecture also introduces the responsiveness needed to deal with complex problems, which are often unpredictable and asynchronous.

What is event-driven computing?

Given the context of microservices, event-driven computing is a model in which subscriber services automatically perform work in response to events triggered by publisher services. This paradigm can be applied to automate workflows while decoupling the services that collectively and independently work to fulfil these workflows. Amazon SNS is an event-driven computing hub, in the AWS Cloud, that has native integration with several AWS publisher and subscriber services.

Several AWS services have been integrated as SNS publishers and, therefore, can natively trigger event-driven computing for a variety of use cases. In this post, I specifically cover AWS compute, storage, database, and networking services, as depicted below. 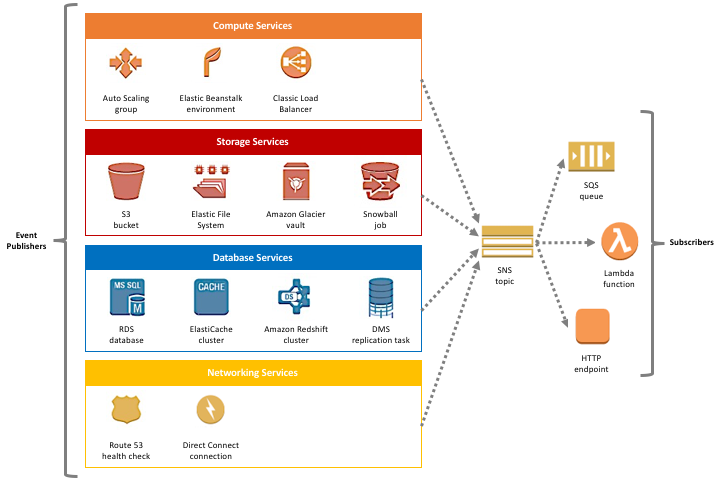 In addition to SNS, event-driven computing is also addressed by Amazon CloudWatch Events, which delivers a near real-time stream of system events that describe changes in AWS resources. With CloudWatch Events, you can route each event type to one or more targets, including:

Many AWS services publish events to CloudWatch. As an example, you can get CloudWatch Events to capture events on your ETL (Extract, Transform, Load) jobs running on AWS Glue and push failed ones to an SQS queue, so that you can retry them later.

Amazon SNS is a pub/sub messaging service that can be used as an event-driven computing hub to AWS customers worldwide. By capturing events natively triggered by AWS services, such as EC2, S3 and RDS, you can automate and optimize all kinds of workflows, namely scaling, testing, encoding, profiling, broadcasting, discovery, failover, and much more. Business use cases presented in this post ranged from recruiting websites, to scientific research, geographic systems, social networks, retail websites, and news portals.