Last year I published a list of the open source blog’s 2018’s top ten posts. This year I’m starting with a list of lists of things that happened on the AWS Open Source blog in 2019.

Some of our new projects, services, and commitments, after a launch and incubation period here on the Open Source blog, have “graduated” to blogs of their own:

This blog’s involvement with robotics started at re:Invent 2018, when we announced AWS Robomaker and our participation in the Robot Operating System (ROS) community. This was followed by more posts about ROS and robotics, particularly after Cam Buscaron joined the AWS Open Source marketing team as an evangelist for robotics. AWS Robotics now has its own blog.

Amazon Elastic Kubernetes Service was announced in preview during re:Invent 2017, and became generally available in June 2018. Over 2018 and 2019, the Open Source blog published many posts about various aspects of running containers on AWS.

The AWS Containers blog was launched in October, 2019 and you’ll now find a lot of the EKS and containers-related material there, but you’ll also continue to see posts at the intersect of open source, containers, and EKS here on the Open Source blog.

Other projects covered in 2019 included Building Your Own AWS Service Broker Services. But open source is a broad topic that can also be found on other AWS blogs, and you’ll find some listed under “Latest Posts About Open Source” on opensource.amazon.com.

As in 2018, we featured a number of guest posts from customers about their projects that run on AWS and are potentially useful to other customers, as well as posts from AWS colleagues about how to use open source on AWS. In addition to the large list above of projects that work with EKS, we published:

Another kind of “graduation”

Last year Ilya Dmitrichenko of Weaveworks and Chris Hein explained how eksctl “gives you a simple, single, one-line command to bring up a cluster with a basic VPC, and completes the process by writing a new KUBECONFIG and deploying the aws-auth ConfigMap, allowing you to get up and running with EKS in minutes.“ This year ”We decided… to embrace eksctl as part of the EKS planning cycle, and to encourage others to contribute as well – and we’ve been happy we did!“

We also aimed to keep readers informed about our participation in open source foundations and events:

We participated in and sponsored many open source events. You can find a full list on opensource.amazon.com. We published blog posts about just a few: 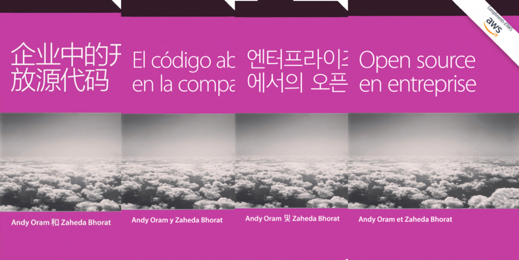 We shared some of our own knowledge about open source:

Late in the year, we were thrilled to have Matt Asay join AWS. In addition to writing the new Modernizing with AWS blog, he has been writing on open source topics for the Open Source blog: