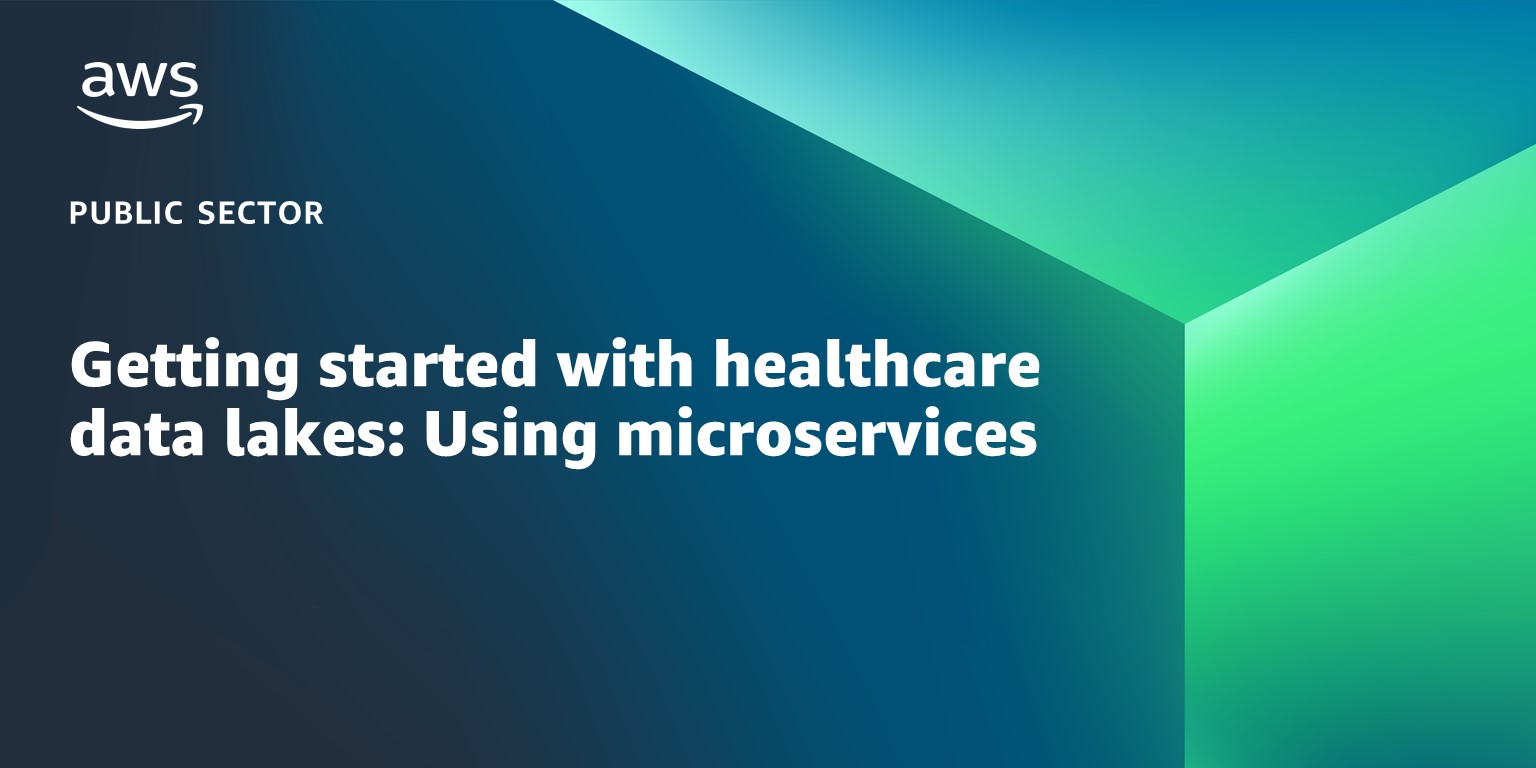 Data lakes can help hospitals and healthcare organizations turn data into insights and maintain business continuity, while preserving patient privacy. A data lake is a centralized, curated, and secured repository that stores all your data, both in its original form and prepared for analysis. A data lake enables you to break down data silos and combine different types of analytics to gain insights and guide better business decisions.

This blog post is part of a larger series about getting started with setting up a healthcare data lake. In my last blog post in the series, “Getting started with healthcare data lakes: A deeper dive on Amazon Cognito,” I focused on the specifics of using Amazon Cognito and Attribute Based Access Control (ABAC) for user authentication and authorization in the healthcare data lake solution. In this blog post, I detail how the solution has evolved at a foundational level, including the design decisions I’ve made and the additional features used. You can access code samples for this solution through this GitHub repo for reference.

The primary change since the last presentation of the overall architecture is the splitting of the singular service into a collection of microservices to improve maintainability and agility. Integrating large amounts of disparate healthcare data typically requires specialized connecters for each format; by keeping these separately encapsulated with microservices, we can add, remove, and modify each connector without impacting the others. The microservices are loosely connected through centralized publish/subscribe messaging in what I refer to as a “pub/sub hub”.

This solution represents what I would consider another reasonable sprint-iteration from my last post. The scope remains limited to simple ingestion and parsing of Encoding Rules 7 (ER7) formatted HL7v2 messages via REST interface.

The solution architecture is now as follows: 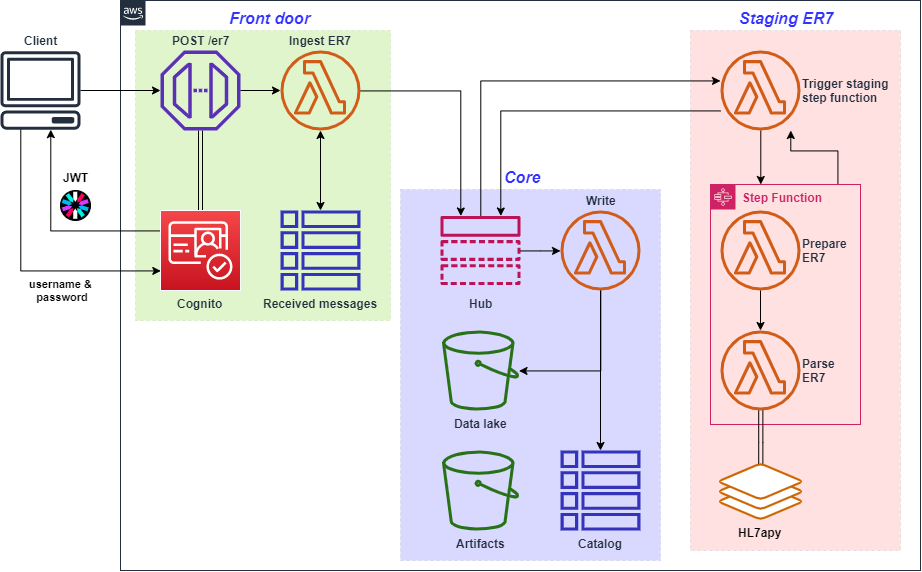 While the term microservices has some inherent ambiguity, some characteristics are universal: they’re small, autonomous, loosely coupled, reusable, communicate through a well-defined interface, specialized to solve one thing, and are commonly deployed in event-driven architecture.

When selecting technologies and patterns to define microservices and the interface between them, you can reference the following communication scope to consider your options:

The use of a hub-and-spoke style architecture (also known as a message broker) works well with a small number of closely related microservices. It helps keep functional dependencies to a minimum as each microservice is only reliant on the existence of the hub and coupling between microservices is limited to the content of messages published. As pub/sub is a unidirectional asynchronous ‘push’ style of communication, it minimizes synchronous calls.

Flexibility comes at a trade-off of structure. Subscribers to the ‘hub’ use message attributes and filtering to determine which messages to act on and which to ignore. Coordination and monitoring are thus still needed to avoid a microservice operating on a message it was not intended to.

The core microservice provides the foundational data and communication layer. It includes the following components:

In this microservice, I chose to allow only indirect write access to the data lake and catalog through a self-contained function. This supports consistency and reduces the burden on other microservices, allowing them to focus on the ‘what’ to write and not on ‘how’ to write it.

The front door microservice provides the API Gateway for external REST interaction and OpenID Connect (OIDC) based authentication and authorization through Amazon Cognito. The front door provides a mechanism for external users and services to communicate with this service and make sure that incoming messages are authenticated, authorized, and unique.

I focused on the technical details of how the OIDC uses Amazon Cognito in a prior blog post in this series and explained how the solution uses API Gateway in the post prior to that; you can refer to those posts for a walkthrough on those components.

This microservice provides the following:

In the architecture I presented in a prior post, “Adding an ingress point and data management to your healthcare data lake,” I included the parsing functionality within the single Lambda function, and in that post, I noted that readers should consider breaking that function up. This is because it better adheres to the microservice principle of being highly specialized; encapsulates complicated logic away from the rest of the application; allows for reuse within the service (and potentially with other services); and allows for independent updating as additional corner cases arise or newer parsing libraries become available.

At larger scale—such as bulk ingests, multiple sources, and/or custom field mapping—the cleaning and parsing logic could grow into a full service unto itself. You could enhance it at that time by adding a private HTTP API integration.

Each microservice is defined within its own CloudFormation stack and the dependencies between them, specifically with the ‘core’ microservice, are implemented through cross-stack references.

For example, within the CloudFormation template for the core microservice, the following outputs are included:

Within a dependent microservice, CloudFormation can import these output values when a reference is needed. For example, within the front door microservice template, the name of the core stack is passed in as a parameter when creating or updating the stack:

I find this—for now—to be the right balance of autonomy and simplicity, as most modifications can be performed without interfering with other microservices.

The solution is using a single Amazon SNS message topic for the “pub/sub hub”, where each microservice sends to a central topic and other microservices subscribe based on their message filtering policy.

An example of the filtering from the staging microservice is as follows:

To deploy this project, you need:

Use AWS Cloud9 as the development environment:

1. Setup Cloud9 as per the “Creating an EC2 Environment” instructions.

3. Switch to the new ‘hcls-data-lake’ directory and then configure the Cloud9 environment:

4. Deploy the services. Replace “$MY_STACK_NAME” with a name of your choice. This takes several minutes to complete.

Within the code cloned from the Git repo is a script which contains code to create a few sample users with differing access and attempts to send several HL7v2 messages to the front door microservice.

After running this client script, results are returned by the service indicating which messages were successfully ingested and stored, which were denied due to inadequate authorization, and which were denied for being duplicates.

Being an asynchronous call, to find the results of the staging microservice, go through the console and view objects in the Amazon S3 bucket that was created.

As deploying this project creates multiple CloudFormation stacks, the scripts also include convenience functionality to delete them. Note that they also delete any objects placed in the buckets that were created as part of the stacks.

Like the initial deployment, the deletion also takes better advantage of parallelism. The front door and staging microservices are deployed in parallel before the core microservice is then deleted.

Summary and next steps

In this blog, I went over the architecture of the data lake as it currently stands, covered several of the technologies used to provided greater decoupling, and provided my rationale for the design decisions that have been made.

Do you have any questions about how to set up a healthcare data lake? Reach out to the AWS Public Sector Team for help.

Read more about AWS for healthcare: