Application modernization allows an organization to implement a new paradigm that brings in more flexibility, agility, and in many cases higher return on investment (ROI) compared to traditional approaches.

However, this is a hard problem to solve and is difficult to estimate the investment effort to perform such a change. Application modernization requires a holistic approach, and Cloudwiry enables optimization and modernization of cloud deployments by evaluating AWS services involved.

In this post, we will walk through how the Cloudwiry Enterprise platform can help your organization make informed decisions about application modernization. We will also take a deeper look into specific examples of how Cloudwiry has helped customers optimize their cloud usage on AWS.

Cloudwiry is an AWS ISV Partner with the Cloud Management Tools Competency.

Making the Case for Modernization

Deciding on upgrading an application from monolithic to modern architecture (such as serverless) requires a thorough understanding of the total cost of ownership (TCO) before and after modernization, and involves investment in the modernization effort.

The idea of modernization is that TCO after migration is lower, leading to a break-even point even after amortizing the investment in the modernization cost.

These are the most common components of TCO that impact application modernization:

To estimate the TCO for infrastructure, divide it into layers and find the most optimal solution for each layer individually for a given business application. The application can be split into layers such as frontend user interface (UI), compute, storage, database, data flow, and messaging augmented with data from application performance monitoring for increased confidence.

Knowing where to start on your modernization journey can be a challenge, but Cloudwiry’s four-phase approach has worked best for our customers and partners. 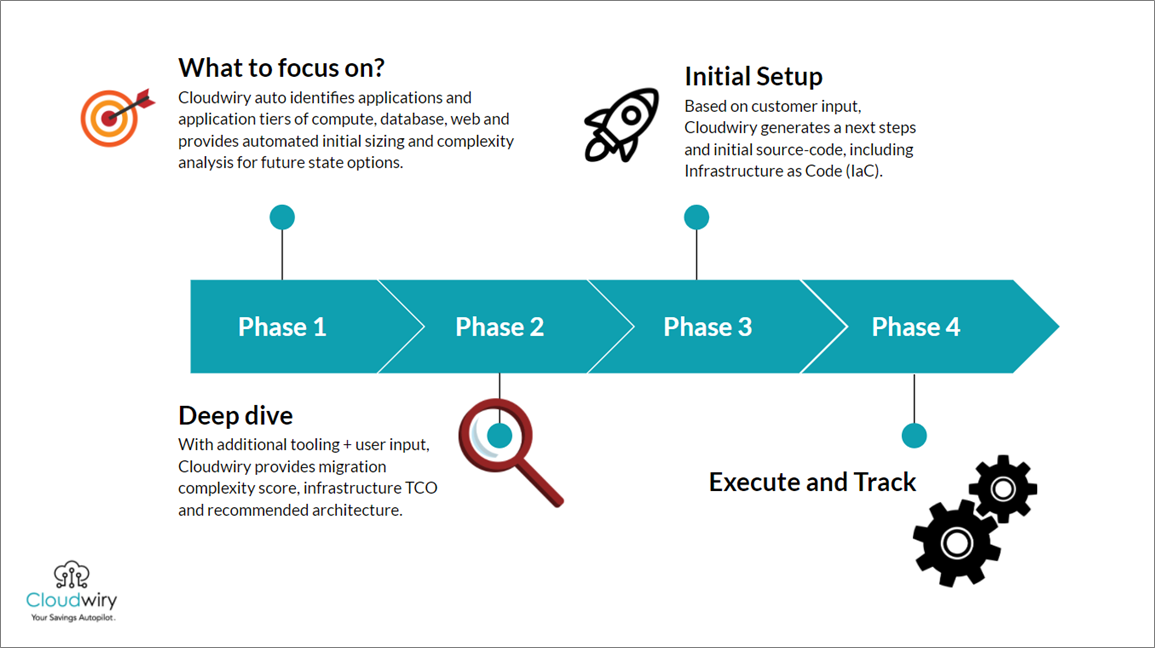 Phase 1: Automated discovery of apps and modernization sizing through details available in the AWS Cost and Usage Report, Amazon CloudWatch metrics, and modern cloud observability platforms such as Dynatrace. Cloudwiry’s Modernization Hub leverages machine learning (ML) to auto-identify tiers of the applications, interconnectivity, and their complexities:

Customer Use Case for App Modernization

Cloudwiry’s Fortune 500 client with over 400 legacy apps undertook modernization migration and needed to identify the lowest TCO option for each application with a detailed analysis of all choices.

They had a number of legacy applications with interdependencies, and had a multi-tier architecture using web, compute, and database.

After the initial phase, Cloudwiry Modernization Hub identified the top 10 applications, their potential savings, and the overall complexity score for the effort. The lower the complexity, the easier it is to modernize.

Amazon EKS running on a Graviton2 with Spot nodes was the lowest TCO option based on elasticity, the cheapest option, and had a low complexity for migration. Also, based on Cloudwiry Elasticity Score calculation, Spot provided the lowest TCO for modernization with high savings. 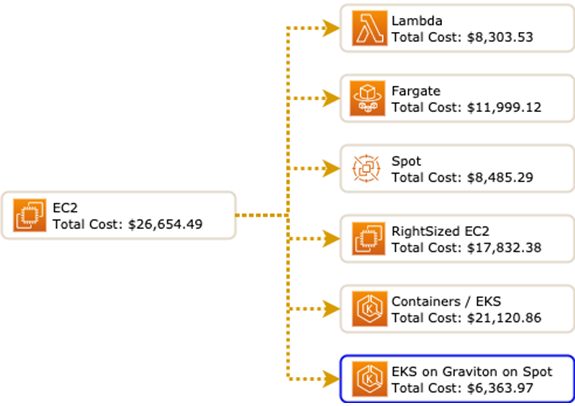 This application contained multiple instances of SQL Server, Aurora MySQL, and Aurora Postgres (63 instances in total). Cloudwiry App Modernization Hub simulated several options like moving from SQL Server to Babelfish and all the flavors of Aurora, including the growing or shrinking Aurora Serverless based on the performance metrics.

In this case, Aurora right-sized was the lowest TCO approach.

Customer Use Case for Spot Instances

Cloudwiry’s client was running more than 20,000 Amazon EC2 instances monthly, and they were looking for ways to optimize compute costs. They had Auto Scaling Groups, but they were not leveraging the Spot instances, only On-Demand.

The customer was using 200+ Auto Scaling Groups and frequently scaling in and out, which leads to high instance churn and raised elasticity index. These factors made them an ideal candidate for Spot, as their instances were generally short-lived. Cloudwiry followed the four-phase approach to solve the problem.

Cloudwiry’s Enterprise Spot automatically categorized the different workload types in the customer’s portfolio and estimated the Spot savings as follows:

This analysis resulted in Cloudwiry-generated CloudFormation and Terraform templates that follow Spot best practices, and customized to the customer’s use case.

For long-term support of the solution, Cloudwiry will track all the variance on Spot instance prices and interruption rates. Alerts will be sent to resource owners, identified by rules when significant deviations are found, and suggest adjustments on the Auto Scaling Group CloudFormation templates.

Cloudwiry Enterprise Spot capabilities enabled the customer to understand the Spot savings for their workloads while avoiding disruption. Cloudwiry’s implementation of Spot instances resulted in an average savings of 39 percent on compute while meeting similar SLAs to the previous On-Demand configuration.

The customer was able to net 93 percent of their potential $73,700 of savings on Auto Scaling Groups—their largest expense.

Modernization and cost optimization yields flexibility, agility, and often, higher ROI. Doing this at scale is a complex undertaking where the application profile and business priorities have to be taken into consideration to identify the right approach.

The Cloudwiry platform delivers cost savings in AWS expenses with:

Check out Cloudwiry on AWS Marketplace, and explore a free trial.

Cloudwiry is an AWS ISV Partner that delivers dramatic cost savings for your AWS infrastructure using a powerful automation platform and extensive knowledge from a team of experts.